What are Microblading and Nano Eyebrows; and features of their implementation:

Microblading (a combination of the two words “micro” and “blade”) is a manual tattoo that creates an imitation of hairs on the skin. The technician makes it by hand, not by machine. The procedure is performed with very small blades: the technician inserts the pigment under the skin in the eyebrow area to a depth of 0.2 mm. The resulting effect lasts for one to one-and-a-half years. Microblading gives a natural shape to the eyebrows and gives the effect of visibly almost every hair. And this is a great way to cut your beauty routine removing the hassle of daily eyebrow makeup using the usual tools.

Immediately after the procedure, some barely-noticeable swelling remains on the skin, but it disappears within the first two hours. After Microblading, the eyebrows retain their natural look and rich color for a long time; but in order for the result to stay with you for a long time after visiting the salon, it is important to properly care for your eyebrows. 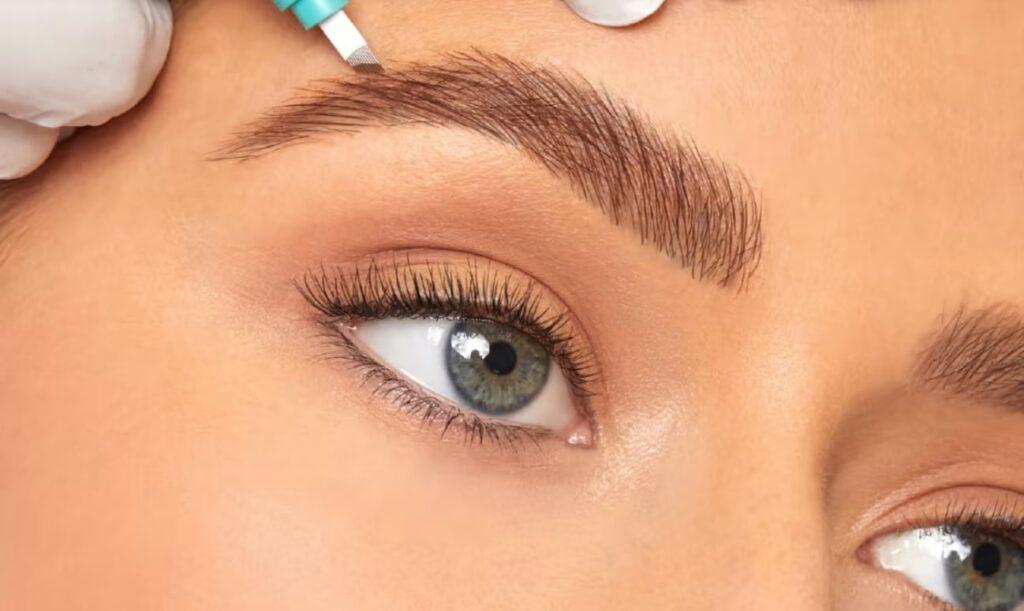 Nano Eyebrows is a modern unique permanent makeup technique without pain, blood, swelling, and scars. The procedure is performed with a very fine single needle and super precise machine to create eyebrows that look natural, without clear contours and pronounced lines. The technician simply delicately emphasizes their natural beauty with the help of volume, color, and soft shape correction.

Many experts say that nano eyebrows technique is considered a decorative type of permanent makeup. The effect of the procedure is an imitation of the result of naturally fuller brows without applying the usual cosmetics.

Before proceeding, a certified technician will consult and clarify what result the client would like to see. It would be beneficial to show the specialist a pencil of your favorite shade.

In any case, it is important to say the desired shape and color of the “new” eyebrows, as well as their intensity. The technician will make a sketch on the face and discuss the nuances with the client up to the approval of the design.

During the session, for greater comfort of the client, an anesthetic cream is applied. It fixes the drawn “layout”. Some professionals of this type of make-up do it with dots and others with strokes.

The first day after the procedure, the eyebrows should be kept dry, afterward, it’s okay to get them wet with water. After the procedure, an ichor is released, which hardens and forms a crust. If the crust starts to fall off, then some pigment will fall off with it.

Redness and some swelling may be noticeable on the first day. You should not scratch, rub or wet this area, and it is advisable to sleep on your back so as not to disturb the fresh pattern. At first, the tone seems too bright and saturated. This is just until the final color appears after the nano eyebrows procedure. Over the next few days, the pigment may become even more pronounced.

Microblading is usually done once every one or two years. It is not recommended to do it more often, otherwise, a scar may appear. If you notice that the color has faded, then once every six months you can slightly refresh your eyebrows.

The effect on the eyebrows depends on the technique and the color chosen by the client. The more saturated the selected color of the eyebrow pigment, the longer the effect of the technique will last. On average, the effect of beautiful and well-groomed eyebrows is provided for 1–1.5 years. If you notice that the color has faded, then once every six months you can slightly refresh your eyebrows.

The duration of the “wearing” depends on several factors:

In the case of the powder version of permanent makeup, the pigment is injected under the skin. But the technique of nano eyebrows is fundamentally different from the classic tattoo. Both techniques preserve the growth of natural eyebrows. During the nano eyebrows procedure, the hair follicle is not injured, as a result of which the hairs stop growing. Due to the depth of pigment injection during the microblading process, scar tissue may form. With nano eyebrows, the pigment is shaded in a hair shape, in the uppermost layer of the epidermis without continuous dense filling.

Microblading is completely handmade by the technician, which is performed using a small blade, and the nano is carried out using a special machine.

If properly done, the results of microblading and nano eyebrows appear on the surface, compared to regular tattooing, which may appear blue-ish over time. The depth of ink injection is only 0.2 mm. Even if there is a lot of cold shade in the pigment, it will still come out of the skin over time, because the epidermis is constantly circulated.

If you like the effect of “pencil” on the eyebrows, then this procedure is unlikely to suit you.

Any pigment that migrates over time slightly changes its shade. Therefore, try to use creams and cosmetics with SPF to preserve the pigment, and come to the microblading or nano eyebrows touch up in a timely manner.

Due to the shallow penetration of the needle under the skin, the healing stage after nano eyebrows is much faster than that of microblading; on average, up to 7 days, depending on the type and sensitivity of the epidermis. The needle leaves no marks or scars.
Nano eyebrows allows you to achieve the main goal – a natural look of full and neat eyebrows. The non-contour method of applying the pigment eliminates the presence of clearly traced lines and helps to achieve the most feathered effect.

Comment on what you think about this beautiful tra

😍 Give your eyelashes a wake-up call, and forge

We could do that, but we don’t! 😅 Permanent M

It's Small Business Saturday 👩‍💻 As a sma

🌷 PERMANENT EYELINER 🌷 This procedure is go

Keep Up With Us on Social!